A Military Minelayer is a cargo ship hauling many warheads, and explosives.

The locations of all the warheads on board.

This ship has fifteen warheads, all positioned to detonate in a chain reaction when reverse thrust is applied.

If the warheads are detonated, there won't be much left of the ship to salvage (shown right).
The ship's exterior will remain mostly intact, however all of the valuable modules will be destroyed; only the carcass of heavy armor blocks will remain.
Sometimes, in a very rare case, not all warheads will ignite. You will lose the thrusters, containers and turrets on the back part of the ship. But the front end with the reactors and the large cargo containers will remain mostly unscratched.

As of v.1.030 (list), It appears that the aforementioned traps are no longer applicable. Now, the ship has a single warhead hidden in the main structure, in between the large cargo containers.
Inside the interior, right after the first sliding door leading into the main structure, there is a sensor on the ceiling, which triggers the countdown on the hidden warhead when activated.

The warhead can be found by removing 2 blocks behind the top turret. As soon as the warhead becomes visible, the countdown seems to be triggered too, so you must grind away on the warhead until it is no longer functional.

As of v.1.030 (list), the Gatling Turrets and Missile Turrets are functioning and will shoot you if you are moving with more than 3m/s.
Align your engineer perfectly with the military minelayer's beacon, with the correct rotation, and allow the minelayer to move into you. Your engineer should saw off the upper part of the armor which can take some time, however you should be safe. After this is gone, you will be able to fit like a glove into the compartment in which the beacon is in. Once here, you may or may not hear shooting, but you will have a limited amount of time. In this time, you must saw into the interior wall beneath your feet in which you will have direct access to the cockpit. Once in the cockpit, immediately disable thruster 22. This will disable the trap.

As of v.1.030 (list), the Gatling Turrets and Missile Turrets are functioning and will shoot you if you are moving with more than 3m/s
If you go for a kill, shot at the warheads in the back. That will destroy both reactors and the upper, lower and back Gatling turrets. But you will also loose all four large cargo containers and several of the small cargo containers.

There are two sections to this ship, but only the front section has an interior that isn't filled with explosives.
A vertical cross-section of the ship, viewed from the left, is shown below: 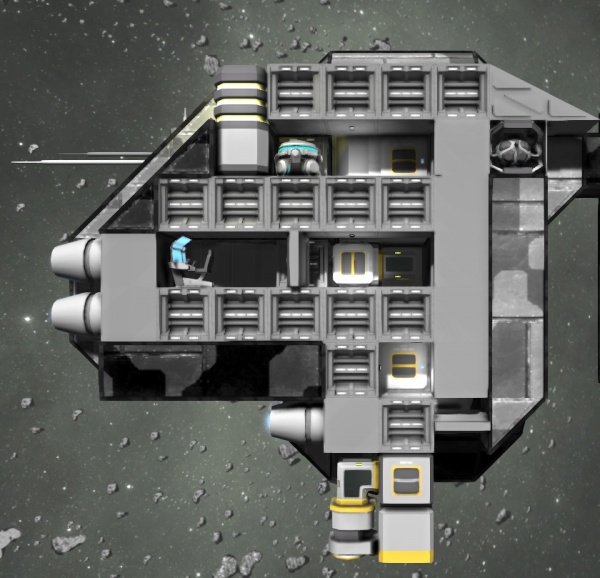 At the bottom of the ship is a door that leads to a vertical shaft made with passage blocks.
This shaft leads to three different levels:

The reverse thruster trap can be disabled by either:

Some heavy armor blocks, or warheads and a ramp need to be removed to gain access to this thruster. When you can access the thruster, use the grinder on them, at least until they are disabled, then you're ready to go.

Alternatively, if you're in a hurry, you can maneuver the ship to where you need it by only applying thrust in a forward direction.
This will mean that you need to point the ship away from your destination before you switch on the dampeners.

Each of the four large cargo containers can easily be raided.
The small cargo containers are near the turrets and hold extra ammunition.
Cargo found so far (the actual Cargo contents may vary):

There are two small reactors accessible from the interior containing 10kg of Uranium each.
Cargo summary:

As of v.1.030 (list), the new Military Minelayer has only one boobytrap. It is now equipped with a Collector and a Connector which are connected to the large cargo containers via conveyor tubes.
The cargo capacity is slightly enlarged due to the additional small cargo containers near the turrets. But these are not interconnected.