There are 2 Gatling turrets on either side of the ship

There is one interior turret visible upon entry through the exterior door.

The specific antenna that spawns drones has a range of 300 meters and is named: "EMERGENCY - REQUESTING ASSISTANCE". This antenna within range will spawn a Assailant drone in defense, at 3000 meters away from the player and every 5 minutes up to a total number of 3 drones active any time.

The most cover from the Gatling turrets can be achieved by approaching from the top of the ship, and slightly forward. (i.e., toward the spotlights with the beacon directly behind)

You may not need to attack at all, but if you do, try attacking the Gatling turret on the ship's right hand side; the gravity generator is on the ship's left, and attacking from the left may result in its destruction.

There are 2 ways to enter this ship, these can be seen on the floorplan below 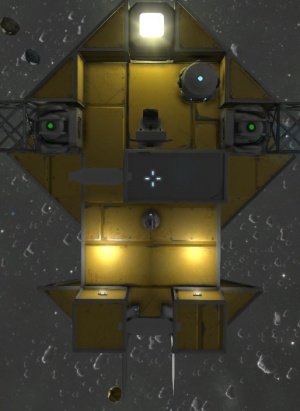 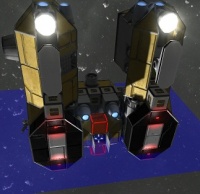 Upon entry from the exterior door, you'll be confronted with an interior turret, to the left of the turret, there is an interior door that leads directly to a room with the cockpit, and no further defences.

Directly behind the beacon there is a steel catwalk that can be easily dismantled to gain direct access to the ship's cockpit.

Each of the two large cargo containers can easily be raided.
Cargo found so far: (the actual Cargo contends may vary)

The refineries are also connected to the conveyor system.
Cargo found so far: (the actual Cargo contends may vary)

There are two small reactors outside of the ship.
Cargo summary:

As of v.1.030 (list), the new Mining Transport has gained 2 connectors and the Conveyor system is improved. The small reactors are now located outside of the ship. The cockpit has changed from type 2 to type 3 and the viewing port above it is now made out of glass instead of a steel shutter.