Used to attach to other ships or to stations for docking. Also useful for towing other ships as well. It can be set to automatically lock onto surfaces or manually.

Operated when piloting a ship; maneuver the ship such that the landing gear is in range (it will be indicated on the HUD, as well as by the ring around the foot turning yellow, then press P (default) to lock the landing gear. The ring around the foot will turn green to indicate that it is locked, and the ship will be attached to the target. You can then press P again to detach.

When landing gear is toggled off in the control panel, the ring around the foot will turn red and keep whatever locked or unlocked state it was in before being shut off. 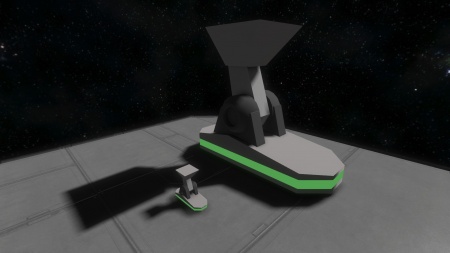 Landing gears are currently known for beeing unstable. They work fairly reliable in single player. But in multiplayer, especially when used on a dedicated server (DS), and in some cases also in single player, they show the following problematic behaviour:

There are no 100% workarounds yet. But some things should be considered when using landing gears.