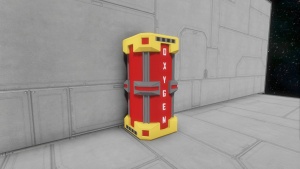 Oxygen Tanks are the primary storage mechanism for Oxygen.

Oxygen is vital resource for the player required for them to breathe in Survival, without access to oxygen either via their suit or an atmosphere they will die.

Oxygen is created when an Oxygen Generator processes Ice. Ice is found in some Asteroids and planets, much the same as any other kind of ore. Oxygen Farms also generate small amounts of oxygen from sunlight only, but require only electricity and no ice.

Oxygen can also be harvested from a Planet's atmosphere via an Air Vent, Earth and Alien planet both have varying degrees of oxygen found in their atmosphere. While Ice itself can also be harvested directly from a planet in the form of visible bodies of water which in reality is Ice and can be processed for oxygen and hydrogen. Earth especially being very rich with oxygen, these planets have infinite amounts of oxygen available.

Oxygen can be stored in Oxygen Tanks (on ships and stations), in Oxygen Bottles (items), and in a space engineer's suit.

A player's suit's oxygen is depleted while the player is wearing a helmet. The remaining oxygen capacity is displayed in the left status panel of the player's HUD in [%], as is the current status of the helmet (if worn or not). A suit's stored oxygen is replenished from a Medical Room, a Cockpit, or a Fighter Cockpit attached to a Conveyor system with an Oxygen Tank or oxygen source (generator or farm). If there is an Oxygen Bottle in a player's inventory when the suit's oxygen level drops below 30% then oxygen will be transferred from the bottle(s) to refill the suit's oxygen storage.

If their suit's oxygen is ever depleted then the character will slowly asphyxiate while their helmet is on. A player with their helmet off while not in a pressurized room or a cockpit with conveyor access to oxygen will also asphyxiate. Asphyxiation results in death if an oxygen supply is not restored immediately.

An airtight room (larger than a single block) of a small ship, large ship or station can be pressurized with oxygen by an Air Vent with conveyor access to oxygen. The air vent can also depressurize such a room, taking with oxygen out and returning it to the conveyor system (if storage is available). A Graph traversal / flood-fill algorithm is used to fill the enclosed space with oxygen. The algorithm traverses through the volumetric grid and checks for enclosed and open areas. 1 stored unit of oxygen is 1m3 and blocks with air (no matter what shape) take 15.625 units of oxygen to fill for 1 large block of air, while a small block of hold 0.125 units of oxygen.

The minimum safe pressure for a character to have their helmet off and breathe in a pressurized room is 50%, if the character is in a room with some oxygen but not enough to reach 50% pressure they'll take 1 hitpoint of damage per second; Even if this room's pressure is tiny any pressure above 0% will do. If the character is in a room with no oxygen whatsoever (or a room that cannot be pressurized due to a leak exposed to space) or in open space such as an exterior - they will take 7 hitpoints of damage per second. A player in a suit without any oxygen will take the full 7 hitpoints of damage per second and has ~14 seconds to find oxygen or they will die.

Assuming you are in an airtight, pressurized room entirely full of oxygen: