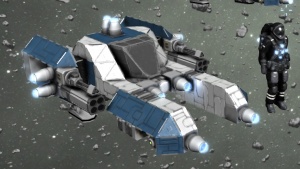 Small ship with astronaut flying next to it

Small ships are the fighters and miners of Space Engineers, and essential to the game. They are cheap and easy to build, with the most challenging part being the logistics on how to make the aesthetics look and work with the functional parts. Their size enables them to fly through small gaps in asteroids, and dock on larger ships.

Small ships can still have some "large" parts, such as a large thruster, and a large reactor (as in these cases 'large' refers not to the size of the ship, but to the fact that there is a smaller component with similar function), but are prevented from having others. The gravity generator is an example of this, as it can only be used on a large ship, and a space station.

It is called small ship because blocks are 20% in scale of Large ship blocks, and it has limited blocks available, that allows to use in building process only low powered components.