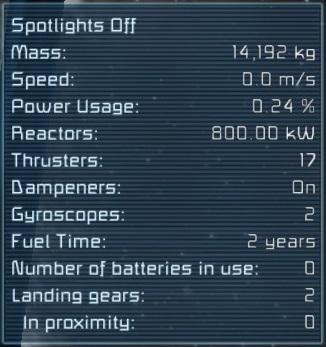 The Grid Info Panel that is seen while in a cockpit.

A Grid is a technical term for any independent collection of blocks that form together any ship or station (small ship, large ship, station). Their key features include among other things: their shared native use and distribution of electrical power, the shared ability to natively control and access various blocks connected to this grid through the terminal(control panel interface), the shared control and use of thrusters/wheels from Cockpits, a single center of mass, the automatic stabilization of the grid with Gyroscopes and unified control of all Spotlights, Connectors and Landing Gears in Cockpits.

Separate grids can be merged together to become a single grid through the use of Merge Blocks. Grids connected this way can later be split into two grids (the smaller of which having lost its original identity) by disconnecting the Merge Blocks if no other blocks touching the other grid.

The name comes from the fact that all blocks are stuck in a three-dimensional grid. A placed block will create a new 3D-grid if it is not placed into an existing one.

There are currently two sizes of grids. Each grid can consist only of blocks of a matching block size. Blocks are therefore commonly referred to as being either "small-grid" or "large-grid" blocks. (Also "small ship" or "large ship" / "station" blocks.) Grid sizes may be mixed only through the use of Sub-Grids.

Other Grids connected via Connectors or Mechanical blocks such as Rotors and Pistons to a larger grid are often called sub-grids. Connected sub-grids share the access to electricity and terminal control (control panel interface) as well as any connecting Conveyor systems. This does however not grant true native flight control over Thrusters or Gyroscopes through Cockpit-blocks. They all still have their own independently managed power system, control system and physics. The functional blocks of each grid connected in this fashion are available in the Terminal of other connected grids but with their display name colored slightly differently (compared to the standard color for Terminal items) to indicate this. All blocks on the same sub-grid will have the same color. Be warned, sub-grids are notoriously unstable especially in multiplayer. Rotors and pistons have a tendency to become misaligned during movement or rotation compared to attached grids and violently explode. For this reason, these sub-grids are automatically locked when ships are traveling faster than 100 m/s.

Whenever players build or construct anything, they do so via connecting blocks to an already existing Grid or need to first place a starting block to build a new Grid to build from. Otherwise construction of new blocks is not possible. For Ships they typically start with Landing Gears while Stations start with a Light Armor Block.

Supergridding is the act editing a Blueprint or save file outside of the game to alter the properties of a grid or its blocks beyond their normal limits. Doing so can allow the mixing of block sizes or even make blocks invincible, which is usually considered cheating.