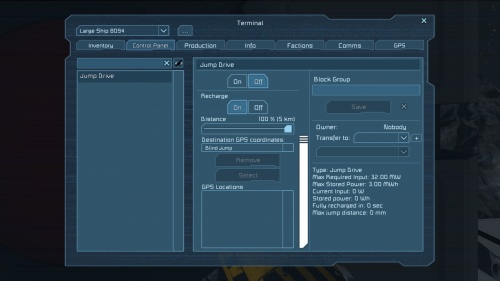 The Terminal is a core interface for any ship or station providing access to the ships systems and information about those systems. It's default key-binding is K. Access to a grid's terminal system is provided through use of Control Panels, or Conveyor Ports, or Remote Access via an Antenna. Control Panels are very common with terminating blocks (Doors, Cargo Containers, etc) and if one is unavailable or simply inconvenient, it's possible to place a Control Panel block purely to provide easy direct terminal access.

Allows the player to interact with a variety of block specific functions, such as set the field size of a Gravity Generator or manually enable or disable certain blocks. This screen also allows the player to set and transfer ownership of blocks to different factions or set amount of access other factions have to blocks owned. While most blocks present configurable options here, a few do not, such as Conveyor conduits.

This a Assembler specific tab, allowing the player control and access of its operations in assembling or disassembling components. Each individual assembler can be accessed via a drop down menu.

Provides an overview of grid information (such as mass, number of non-armor blocks and general statistics) for the specific grid it's accessing. Along with toggling certain display modes such as showing antenna range or gravity generator range. In addition, it also allows the ship to be named (as seen on the Terminals Access Screen) and convert stations to large ships.

Provides faction information and is the primary interface in organizing them. A variety of actions can be done here, from forming new factions to declaring war on other rival ones. See Factions for more information.

Primary used to chat to other players and factions. It can be used to publicly announce something or privately talk to another player or broadcast to your faction.

GPS is the primary method players can mark locations in the game, without using Beacons or Antennas which previously served this purpose. Players can directly input a custom location and mark on their HUD or automatically have one placed on their current position. Once placed the player will be able to at a glance see their current distance from that point. These points are very useful for navigation around space but also used in a variety of blocks such as Remote Control and Jump drives.