The Jump Drive allows for instantaneous relocation to a distant location. Once activated, the block initiates a short countdown, then stretches the screen and teleports the ship to its new coordinates. This is faster-than-light (FTL) capability.

The Jump Drive is only available for large grids. Its dimensions are 3,3,2 large blocks. Before use it must be charged like a battery; maximum storage is 3 MWh
3,000 kWh
10,800 MJ
, and its maximum charge rate is 32 MW
32,000 kW
32,000,000 W
. Like Batteries, charging incurs a 20% energy loss. It will take 7 minutes and 1 second to fully charge if power is unrestricted. Once fully charged, the block can be activated to jump. This will expend stored energy. Jump distance is proportional to energy expended and inversely proportional to the mass of the ship. Multiple drives may be combined to extend range.

Jump drives will not activate unless there is at least one drive on the ship at 100% charge (making multiple consecutive jumps require additional, preserved drives), will not jump the ship less than 5000 meters, and will not jump within 2km of any object (attempting to do so will result in a shortened jump). The Jump drive will not activate if the ship is attached to a station or anything immobile such as stations attached to or embedded in asteroids. In addition, the Jump Drive will not activate if the drive or any part of the ship it's a part of is currently within at least 0.05 G of natural gravity (eg. a Planet); nor can it jump into such a natural gravitational field. The jump will also fail if there is a planet or moon blocking the line of sight to the jump point.

The jump must be activated from a "main" cockpit, by use of a toolbar, and will start a short countdown. The jump may be aborted by turning off the jump drive, but the energy will still be lost. The jump may be a "blind jump", in which the ship advances X meters forward in whatever direction it happens to be facing (relax; you can't jump into anything), or a jump to/towards a GPS point. Configuration is done through the control panel and activation is done from the cockpit toolbar.

Ships attached by connector or landing gear will be dragged along for the ride, as will any astronauts in cockpits, control stations, flight seats, or passenger seats. Any ship or astronaut not so connected will be left behind, regardless of whether they were inside an enclosed space, so watch that you do not accidentally leave friends or equipment behind.

Calculation of energy costs and maximum distance and designation of which blocks will jump appears to be done when the jump command is given. A ship docking after the countdown begins but before the jump will be left behind. This prevents obtaining a cheap jump by activating a drive on a smaller ship then engaging landing gear connecting it to a large one.

Charging a jump drive from empty to fully charged requires 3.0 kilograms of Uranium Ingots. A default red ship (2,585,761 kilograms) can go 1933.67 kilometers on its two jump drives (6 MWh, total). This indicates a cost of 1.2*10^-12 MWh/(kg*m). Translated: moving one million kilograms of ship the minimum jump distance of 5km requires 0.314 kilograms of uranium ingots. One uranium ingot will get a million kilos of ship 15,916.69 meters.

Maximum jump distance for any ship depends on two things:

Where R is the maximum jump range in kilometers, J is the number of jump drives, and M is the total mass in millions of kilograms (Gigagrams)

Note that these values are for one Jump Drive. For multiple Jump Drives the values scale linearly, meaning that the ship of the same mass, but with two Jump Drives, will be able to jump twice the distance than what the graph shows, and a ship with three Jump Drives three times the distance, etc. These values have been acquired by precise in-game testing and then graphed. 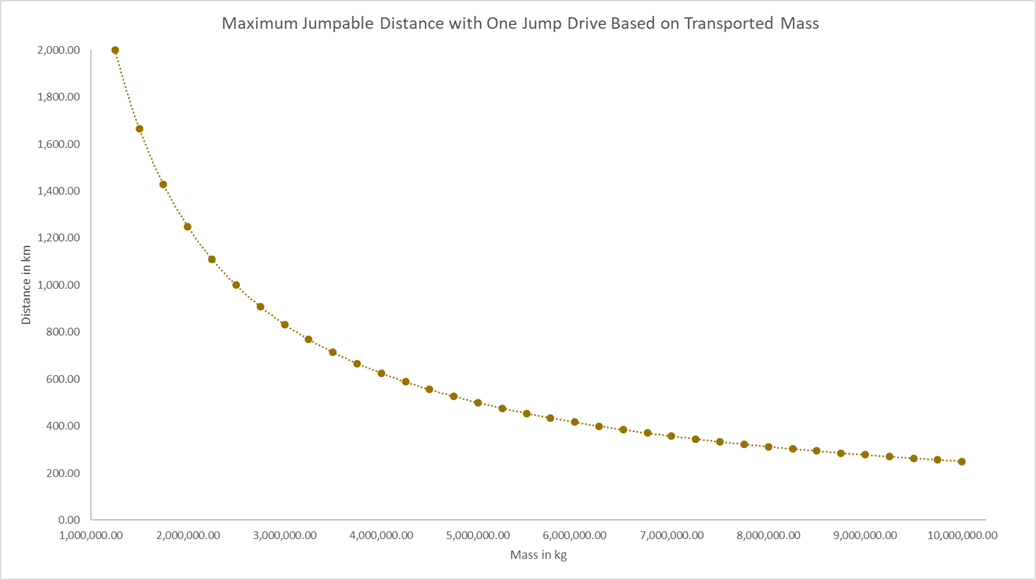 These are some convenient jump-able GPS coordinates near each planet and moon:

Note: The action of jumping cannot be automated.