The Laser Antenna is a block capable of establishing a communication link between two units. Contrary to the Antenna, it does not broadcast the ship/station name of the specific systems it is on, giving an advantage on PvP servers - communication between two different locations without revealing the position of either. However, as the name would suggest, Laser Antennae must have a clear line of sight between them and has unlimited range (this allows secret communications between Earth and the Moon, for example, which are approximately 160km apart on Easy Start Earth). Players, Ships, Stations and Asteroid present in the direction of two Laser Antenna facing each other will disrupt the communication until the path is cleared.

The Laser Antenna can also relay the signal of other antennae within its range as long as another Antenna or Laser Antenna are present within the same system.

Unlike the Antenna, the Laser Antenna has a longer range and does not broadcast its location. The maximum power demand on the large ships and stations for the Laser Antenna is alot higher compared to the antenna. The ability to not publicly broadcast its location comes at a cost; with direction limitation, more power usage and a requirement of a clear line of sight; the laser antenna can only connect to exactly one other laser antenna, and cannot connect to a regular antenna at all. This means that a laser antenna can only remotely control one ship/base. The path between two linked Laser Antennae must be clear and the direction is limited by it own base, making it impossible to broadcast at full 360 degree range. You also cannot control remote structure directly from the control panel, you must sit in a cockpit or control station.

In order to connect two grids, both have to be powered and both laser antennas need to be within direct line of sight. There are two ways to connect:

A permanent connection can be made by ticking the corresponding checkbox in the terminal (or if a script set it to true). In which case if the connection is lost both antennas will try to reconnect. Note that if the connection was lost because one of the grids moved out of the currently set range, then the antennas themselves are not capable of moving the departing grid back to position. Here too, a script can be used to detect that the antenna is out of range, and attempt to move closer to the last known location of the other antenna (or increase the range). However, the moment both antennas are in range and achieve line of sight again they will automatically reconnect without the need of player intervention or a script.

The laser antenna functions similar to that of Antenna block in which you can control ships and stations remotely from extreme distances, provided you have a direct line of sight connection between both laser antenna blocks. After a connection is made, similar to how control over a regular antenna, the player simply scrolls down and locates the Remote Control Block. The only condition to this is that the player must be seated on the ship or station with the laser antenna in order to gain access to the other ship it is connected to.

You can use this formula to calculate the power consumption of the LA: 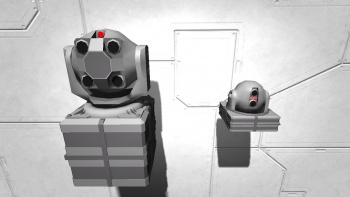 There is an insightful discussion on Keen's GitHub web page on Programmable block communication scripting and other antenna hacks (from 2015-Oct to 2016-Jul).

For those needing a quickstart on building their own custom scripts for Laser Antennas, the following code may assist your endeavors.