A Programmable Block can be programmed to do different functions, like switching lights and controlling doors. It can also be used by entering the control panel in the Terminal. It has almost unlimited functionality.

Programmable Block scripts run in a single update (single frame) and any that take too long to complete are aborted. This means it is impossible for a single run of the script to 'wait' on any event. If you want your script to run when something happens, you need to either find a way of getting another block to trigger it at the right time (an 'interrupt-driven' approach via eg. a sensor block), or modify your script to check for a precondition and set up a timer to run it regularly (a 'polling' approach). Depending on what your script is doing, one approach may be the preferred or even the only way to do it.

Edit – it will open the editor for editing scripts and the ability to save/load scripts from and to disk. Also, you can upload your scripts to workshop and download subscribed scripts. 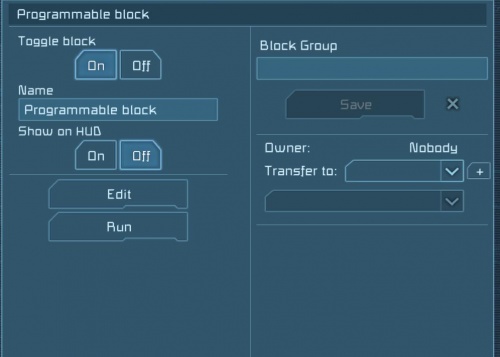 This screen will show up when you press details for script from workshop and it contains these buttons: 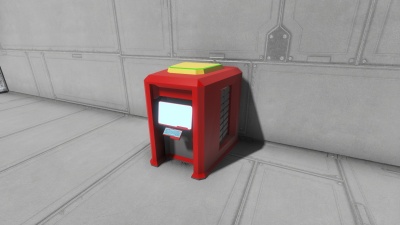 Problem - Currently using of foreach loop inside script will cause “bad program exception” at some configurations and prevent script from running. We are working of fixing this issue.
Workaround - All our interfaces used in in-game scripting are using lists as collections. Please use For loop for iteration across these lists

Problem: Currently lambda functions are not supported, if you use them in script, exception will be thrown and script will not run.
Workaround - Please use method instead of lambda function if possible.

Problem - Currently using user defined static members or methods will cause script to throw exception and the script will not run.
Workaround - Please don’t define static methods or variables.

Problem - None of the user defined variables inside script are saved, therefore after loading game they are reset to their default values.
Workaround - We added string variable called "Storage" that will be loaded and saved when the block is loaded and saved.