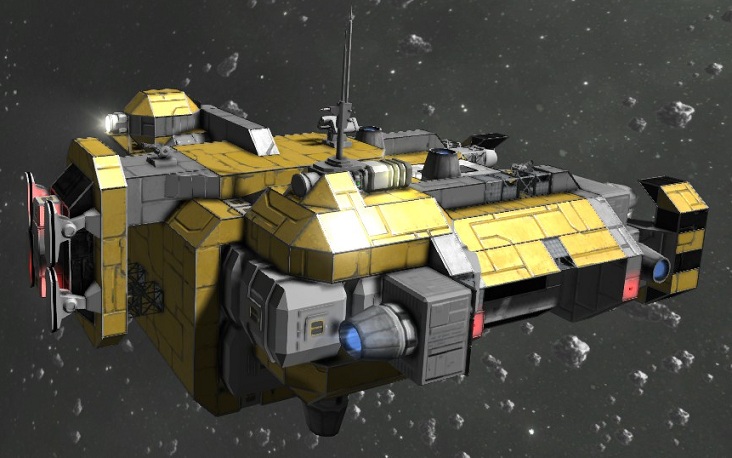 Although there are a few anti ship defences surrounding the ship, there are blind spots

the ship's interior has no defences

Although there are a number of defences surrounding this ship, there appear to be large blind-spots when heading directly toward the ship.
It appears that a viable safe approach will be to go to where the ship is heading, face it, and head directly toward it.

Alternatively, there is a landing pad on the ship's back (shown in the cut-away below), but it has a Missile Turret directly in front of it... so good luck with that.

However: As of v1.23 (list), the Gatling Turrets and Missile Turrets aren't functioning.
So at this time, approach tactics are speculative only.

As of v1.23 (list), the Gatling Turrets and Missile Turrets aren't functioning.
So at this time, attack tactics are unclear.
But one thing is clear, avoid shooting the explosives

The ship's Cockpit is directly behind the right side Spotlight, located on the ship's top.
From the ship's interior, the only way to get to the Cockpit is through a small labyrinth of Passage Blocks starting at the Steel Catwalk midst the Large Cargo Containers

There are 3 ways into this ship (assuming you don't blast a hole into it):

Landing Area Door
In front of the landing area on top of the ship is a Door that leads (via vertically placed Passage Blocks) to the upper level of the cargo area.

The reverse thruster trap can be disabled by either:

There appear to be 2 ways to get to the thruster, from inside, or from outside.
This is probably best observed from the cut-away floor-plan shown in the Entry section above

Alternatively, if you're in a hurry, you can manoeuvre the ship to where you need it by only applying thrust in a forward direction.
This will mean that you need to point the ship away from your destination before you switch on the dampeners.

Cargo Containers:
Each of the 18 large cargo containers can easily be raided.

Reactors:
There is 1 Large Reactor accessible from the interior containing 2kg of Uranium Ingot.
There is also a Small_Reactor on the ship's top left, but it contains no Uranium Ingot, and is only accessible by removing at least one surrounding block.