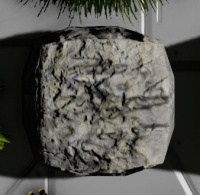 Raw stone, which can be processed in a Survival Kit, Basic Refinery, or a Refinery to produce small amounts of Iron Ingots, Nickel Ingots, Silicon Wafers, and Gravel. It is relatively abundant as asteroids and planets are entirely made up of this 'ore' in the absence of other more precious ores. Stone appears with a variety of different textures dependent on where the stone is sourced. When dropped from a player's inventory, stone loses its color and appears as dull grey, with a distinct lack of shine.

While stone used to be a viable source of ammo for gravity cannons, with recent updates significantly nerfing, if not removing, item damage, these cannons are but obsolete. Stone is used in the production of gravel which in turn is required to make Reactor Components.

Approximately 0.6k of stone is gathered by a large grid drill per cubic metre of voxels mined.