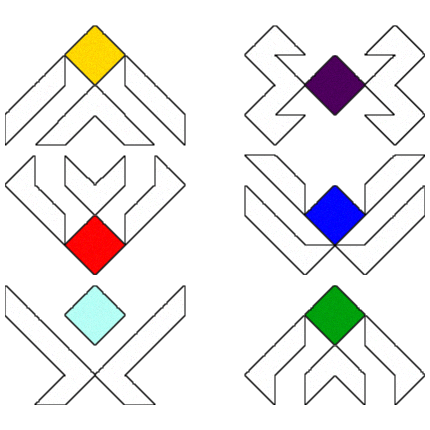 The Fleets of Khaordum, also called the Khaordum Naval Service, or simply the Naval Service, is a faction based off of the Royal Navy. The faction draws its lore from the fictional universe of Khaordum, created in its entirety by founder Conrad Larson.

The Fleets of Khaordum are comprised of six Fleets, each paying homage to one of the Gods of the Elsward pantheon. Each Fleet serves different purposes both in war and in peacetime, and as such have different basic design philosophies.

New personnel enlist as ratings. The application process is overseen by the Chief of Naval Staff himself, or by recruitment officers. Once ratings have passed out into the fleet, they are free to move between any of the six fleets and six fleet auxiliaries at any time, except in war and on deployments where they are required to serve a particular fleet.

The Fleets is the main branch of the Naval Service, comprising the six fleets and their fleet auxiliaries.

Flag of the Aurelia Fleet

The Aurelia Expeditionary Fleet specialises in long-distance deployments far from the established territories of Khaordum. The ships of the fleet typically have fairly light armour and armaments, and have large engine nacelles that seem to pull the starships through space.

Flag of the Fyrus Fleet

Flag of the Aerin Fleet

The Aerin Naval Carrier Fleet is the primary fleet that the Fleet Space Force operates alongside. Nearly all larger ships have massive hangar capacities, with the some supercarriers being able to hold smaller starships in their hangars.

Flag of the Tyrrhius Fleet

Flag of the Tidus Fleet

The Tidus Terrestrial Invasion Fleet is built around terrestrial landing ships (Ships able to land on large planetoids and even some planets) and is the primary deployment fleet for the Space Marines. The fleet also features a number of ships designed to board enemy ships and installations.

Flag of the Alterra Fleet.

The Alterra Naval Defence Fleet specialises in defending Khaordum and her assorted colonies, stations and outposts. The Alterra Fleet utilises ships with distinct heavily armoured topsides and bows and less armoured bellies. Alterran ships of Cruiser designations and above have large gun batteries on the top deck, with large arcs of fire. These ships engage at long range, keeping the armoured topside towards the enemy, and rely on fighters, Corvettes, Frigates, and Destroyers to defend the larger ships.

The Alterra Fleet Auxiliary is a logistics and support fleet that operates in a more civilian fashion, and supplies the Fleet with ammunition, fuel, and other supplies through replenishment in space (RIS).

All ships of the Alterra Fleet are prefixed with Alterra Fleet Ship (AFS) and each is assigned a pennant number that indicates the role of the ship. E.g. AFS Fulvus (D01) is a Destroyer, whilst AFS Behemoth (I01) is a Dreadnought.

The Space Marines is the most physically challenging branch of the Naval Service. Space Marines are required to maintain peak physical condition, and are subject to numerous exercises in zero-g, high-g, and no atmosphere conditions. The most famous exercise that trainee Space Marines undergo is 319 Vacuum Survival Course, a three week course on how to maximise your chances of survival when subjected to a vacuum without a sealed suit, culminating in a live drill in which the recruits are sent out from one of Spartan Training Station's airlocks and have to navigate to and enter through another airlock, all while wearing nothing but their deck uniform (Uniform worn under suits, no helmet).

The Space Marines are separate to the other branches. One must enlist with the Space Marines from the outset or undertake the All Arms Commando Course, which is the same as the Space Marine recruitment course aboard Spartan, but without the initial training that a man of the Fleets would already have.

The rank structure in the Space Marines is again separate to the other branches, but should one be part of both, it is their highest rank achieved in either the Fleets of the Space Marines that takes priority.

Enlisting in the Fleets or Space Marines

A personal message from the Chief of Naval Staff, Admiral of the Fleet Conrad Larson:

The Naval Service is opening recruitment. Please send me a letter of application at the location indicated below. In your letter please explain why you wish to join the Naval Service, and include anything else you think relevant. Should your application be successful I will then correspond with you to organise the start of your recruit training course.

Good luck one and all, Godspeed.

Got to the mainpage as shown in the table at the top and repeated here and navigate to the 'enlist' page. Fill in the form as per the application format and send it off. Good luck.