Hello, Engineers! The team continues to mainly focus on the next major release but in today's update we still have some nice improvements for you. Character backpacks, which could decrease the performance on highly populated servers, can now be removed from the world via the "Remove Floating Objects" function in the Space Master screen.
Due to the feedback received from last week's update, we decided to tweak thruster damage so now the "damage shape" strictly follows the visual representation of the thruster flame.
Additionally, the in-game Chinese translation was updated and other minor issues and crashes were resolved. 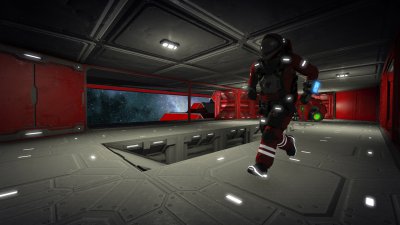 Hey guys, given the amount of discussion about thruster damage, I thought this would be a good time to explain what exactly has been going on.
The original problem was that thruster damage simply didn't work in lots of cases. It ignored some kinds of blocks, certain configurations disabled damage on the entire grid, it didn't work on servers, on and on. On top of that, the damage volume was a cylinder implemented in a bad way, which was taking a lot more CPU time than it really should have.

Over the past few weeks, we've been working on rewriting the thruster damage system from scratch. The result is that the damage system actually works. Instead of a cylinder, we used a rectangular bounding box for the damage volume. This is because our engine is designed with several very fast methods to get entities which intersect a bounding box. However, the box only checked for the entire cube volume of blocks, instead of physics intersections, which caused it to behave unexpectedly.
So we have a new solution which combines the best of both worlds. It uses the bounding box to get a rough list of entities, then a capsule shape to check for physics intersections. This isn't as performance friendly as just the box, but it's better than the original solution. The cost of the physics check is a tradeoff to make it behave realistically, but it's well worth it.

The end result is thruster damage with the same volume as before, but performs better and actually works.
We really do appreciate all the feedback you've given us over the last week :)