The merge block allows two ships, stations, or parts to connect, and disconnect from each other much the same as Connectors. However that is where similarities end, the merge blocks literally merge both ships together. In technical terms, separate grids (ships) merge together via two merge blocks to become one single grid. While in this state, the two act as one. Power is shared, and control panel interface is merged, and thruster control is also shared. Powering off one side of the merge block connection will disconnect both grids, allows them to part ways.

The merge block will attract and connect to another merge block when brought into proximity, combining two grids. This process is entirely automatic by both merge blocks once both merge faces are oriented into a compatible locking position. When merged, power and control will be shared across both grids. Much like the Connector, these functions rely on a power supply native to both grids in order to power the merge blocks. Merge blocks do not directly provide cargo transfer support. When both grids are merged, users may bridge them together with other blocks such as Conveyors or Connectors as they will count as a single ship grid.

For large ships to decouple from stations, the large ship or station must first disable one of the merge blocks, and then the ship must be converted back into a ship before being able to go under way. - This only applies if Station Voxel Support is disabled in the world. 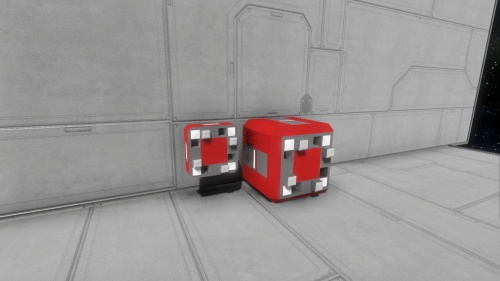