A Kinetic Torpedo is simply an arrangement of blocks, usually small (3x3 or 5x5 cross section under the small block set) as its own entity, loaded into a platform or spacecraft. The spacecraft accelerates to maximum speed, then "launches" the torpedo at another object, (ship, station) to produce a damaging effect.

The concept of a Kinetic Torpedo is simple, it's a lot of force being applied to a very small area. This 'force' comes from an impact between two objects moving at different velocities to each other, more specifically its the kinetic energy needed to accelerate and most importantly de-accelerate your projectile. The more you put in, the more destructive power you get out of your projectile. Classically this relationship is defined by KE = 1/2 x mass x velocity^2 - we can conclude several things from this. Mass and velocity are the primary factors, but velocity is the most important factor. In Space Engineers, the default maximum velocity any ship that can be accelerated to is 104 m/s - so its ideal that the weapon hits at this speed. The secondary factor however is not limited like velocity is, the heavier and faster your torpedo - the more destructive and powerful it is. Penetrating more armor blocks in a larger area. Concentrating this impact force on specific points is also worthwhile, although its wise to keep the projectile 'top-heavy' so when it lands it doesn't spin off or tumble. A hit should dig and bury itself into the enemy ship and hopefully completely be disintegrated in the process.

It's also very worthwhile to keep in mind your projectile's capablity of withstanding defending gatling turrets and missile turrets, if your projectile is liable to break into pieces or tumble away or even actually get completely destroyed (which is a constant threat for weapons that include warheads). Then the weapon was completely ineffective and wasted. 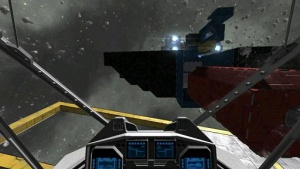 Loading a Kinetic Torpedo into the bay of a spacecraft 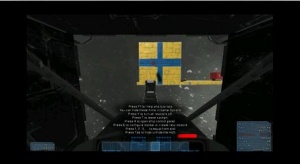 A Kinetic Torpedo, just before impact. 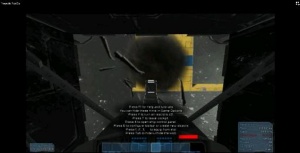 A Kinetic Torpedo, just after impact. 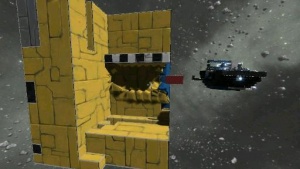 Effect of a Kinetic Torpedo and large blocks

With the advent of thruster damage, there is an alternative way to ensure that the torpedo remains in its bay while still allowing it to be fired. Construct the torpedo as a part of the ship, with a single block that effectively connects it. Have a thruster pointing directly into this block and turn it off until ready to fire. The rest of the procedure is as described above, except in this case the torpedo will be launched when the thruster breaks the connecting block.

With the addition of the Artificial Mass block, there is yet another possible alteration to be made to the design. By setting up some gravity generators that pull down the tube and adding Artifical Mass blocks to the torpedo, it can be launched without having to move the parent ship.