Astro Dynamics is a corporation founded at the end of the 21st century. It focuses on operations in and around the ore-laden asteroid belts of Space Engineers. Though it began as a peaceful mining group, repeated pirate and raider attacks forced a more militaristic presence, and eventually Astro mining colonies evolved into fully-operational space stations, complete with defenses, long-range sensors and communications, heavy armor, and large ship construction arrays.

Members of Astro Dynamics are not to attack any player without cause, and must remain polite and refrain from trashtalk, hate speech, and other behavior likely to negatively impact the enjoyment of other players.

Membership in Astro Dynamics is a low-commitment venture. Astro does not insist on exclusivity (members can be members of other groups, too) but asks that members remain true to its policies while flying under its banner.

Membership in Astro Dynamics currently includes the following perks. As Space Engineers and Astro both expand, so will the list of perks.

Members of Astro dynamics are expected to adhere to a code of conduct.

Astro Dynamics is not responsible for any behavior of its members while those members are not flying the Astro colors.

Any ship flying under the name of Astro Dynamics must have the Triple Chevrons visible from any facing. 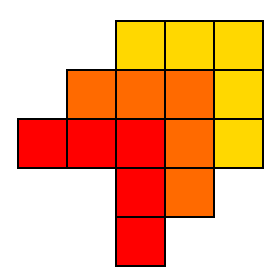 The Chevrons may be resized, but the color order must remain the same and the shape cannot be changed. Any ship impersonating the colors of Astro Dynamics is subject to punishment at the discretion of Astro personnel present at the time.

Neutrality is the default state for faction relationships with Astro Dynamics. Engineers that are faction-less will also be treated as Neutral.

Any faction wishing to ally or partner with Astro Dynamics is asked to complete the Application for Alliance or Partnership.

Any faction declaring war on Astro Dynamics may do so officially, and be noted in the record as a War target, using the Declaration of War.

Factions currently at war with Astro Dynamics can fill out the Alliance or Partnership application to make their desire for peace known.

Ships and stations built by members in the name of Astro Dynamics should follow a loose set of guidelines to prevent confusion and accidents.

Vessels printed with the Astro Dynamics logo can be named as their owners see fit, but they must contain a Beacon printed with [ASTRO] followed by the name of the ship. This Beacon may be disabled in combat or stealth situations, but should still be present.

A full list of Astro Dynamics vessels can be found at the Active Ship Roster.

When an Astro Dynamics vessel loses all power to maneuver (including Gyroscopes) and cannot be repaired with materials present in the active fleet at the time, that ship is considered to be totaled. If rebuilt, either by repairing or new construction, under the same name, a previously-totaled vessel will be given a letter designation after its name to indicate this. Ships that have never been destroyed in combat will have no letter designation, while a ship that has been totaled once will be suffixed with "-A" and so on.

Any ship large enough to do so should contain one or more Repair Shuttles. Repair Shuttles are small ships with cargo capacity large enough to carry spare Reactor parts, either to aid other ships in need or to prevent the parent ship from being totaled. If possible, these Shuttles should be in an area of the ship unlikely to sustain heavy damage in combat.