If connected to a Conveyor Network via one of the inventory access points, the oxygen tank can automatically pull in oxygen from attached oxygen sources (like other oxygen tanks, Oxygen Generators, Oxygen Farms) to store and provide oxygen to Air Vents or other oxygen tanks in the network.

If set to "Stockpile" in the control panel, an oxygen tank will store oxygen that gets provided to it through the conveyor network, but will not deliver it back into the network when requested by other blocks. (for example by an air vent). An oxygen tank can be used to refill Oxygen Bottles by placing empty or partly filled O2 bottles into the O2 tanks inventory and either clicking "Refill bottles" or activating the control panel option "Auto-Refill".

If a room should be depressurized by an air vent, there must be oxygen tanks present in the conveyor network that have still enough free storage space to hold the pumped down oxygen in compressed state. Otherwise a room cannot be depressurized using Air Vents.

The colored indicators on the tank show at a glance the current oxygen level inside the tank. 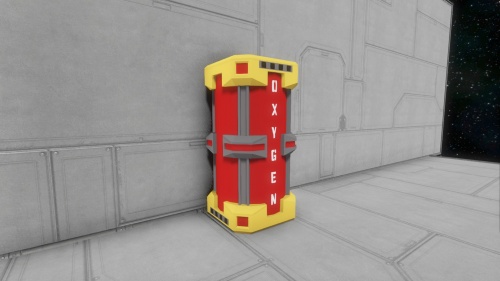 Programming in the program block.