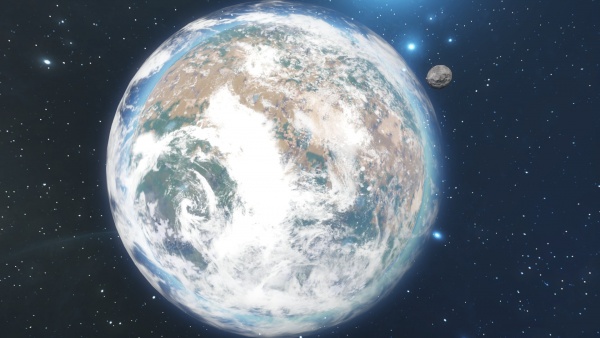 Called "Earth-Like" in-game, the planet is exactly that, a representation of the planet Earth. The planet has vegetation, various different biomes, and a breathable atmosphere.

Earth has a warm, breathable atmosphere and a blue sky with scattered clouds.

Earth has four main biomes at different latitudes on the planet. Near the equator, there are flat deserts, as well as grassy savannas with tall cliffs and canyons. Next to those, there are grassy plains filled with trees, broken up by occasional hills, cliffs, and ice lakes. Even further from the equator, there are tall mountains with snow-capped peaks. And finally, near the poles, there are hilly regions composed almost entirely of ice.

Earth's atmosphere is breathable and warm near the surface. Oxygen becomes low and the temperature becomes cold at higher altitudes, such as on the mountain peaks.

Ore spots on Earth appear white in the desert and savanna, and black in all other regions.