The sensor is a powered block that is able to detect the movement of players, objects, Asteroids, Ships, and other entities. It can be assigned actions to be triggered when something is detected, and after it leaves its radius.

The sensor has to be powered in order to function. It has a default detection radius of 50m. It is capable of controlling any blocks that are powered, or have any trigger-able actions. It is able to control blocks that have Ownership set to Nobody. In the Setup actions section, the first slot will trigger when the sensor detects any criteria in its range, and the second slot will trigger when the sensor shuts off again (Example. Set slot one to toggle turrets on when an enemy is detected in range, then when the target either retreats out of range or killed set slot 2 to turn the turrets to power off and they will shut down again)

To visualize the sensor's range settings, you'll need to adjust your suit's HUD settings. When not interacting with any ship systems, press the 'K' key (default) to access your terminal. Go the 'Info' tab and select the checkbox which says "Show sensors field range". You will then also need to go to the sensor itself and interact with it with either the 'F' or 'K' keys (default) which will take you to the ship's control panel tab with the sensor selected. Below the sensor's name field, there's a "Show on HUD" option which must be switched to 'On'. 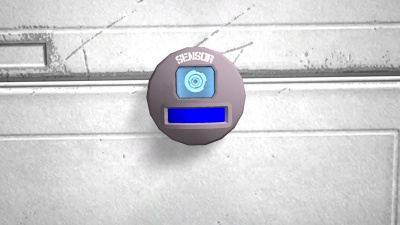